I have worked on some new features for my CarPC. Here are the changes:
First, some videos:

The latest image can be downloaded from the Downloads link on the right of this blog(username:pi, password:a).
Note!
If you do not have any rotary encoder connected or any buttons with a resistor you need to disable the carpc-controller application. You can do this by editing the file /home/pi/StartCarPC and commenting the line which contains carpc-controller.

Hardware updates:
- added ViewHd HDMI to HDMI+audio board
- added SI4703 FM Radio module
- created an expansion board with fm radio module and three connectors(one for GPS receiver and two for rotary encoders)
- added a very cheap board to mix two output channels(RPI and radio) into a single output(which goes to the amplifier, in my case AUX input of the car player)

Software updates:
- added loading movie(created by Doru Ignat)
- added a python server responsible for controlling the radio module via i2c
- added new XBMC plugin for controlling the FM Radio(including storing up to 5 radio stations in a file)
- improved carpc-controller to support sending multiple commands for a single button press or encoder turn(e.g. turning right one rotary encoder can increase the volume in XBMC and the volume of radio at the same time)
- improved the speed in Navit clicking
- improved the Navit OSD for both day and night setup(Navit switches automatically teh setup based on the time of the system).
- added time synchronization mechanism based on GPS readings(RPI does not have a real time clock) 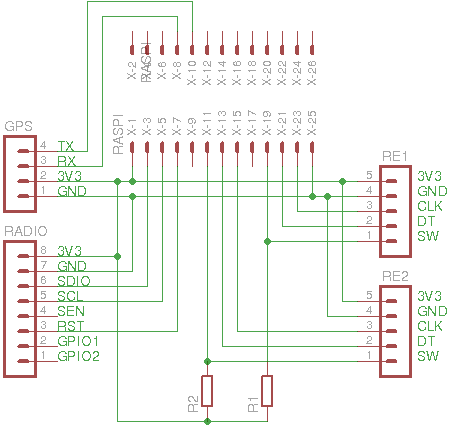 RE1 and RE2 are rotary encoders.

The FM Radio driver and Python server.
The FM Radio module is connected using i2c communication interface(GPIO0-SDA and GPIO1-SCL of the PI).
The radio driver is contained in the si4703 python class. The Radio server is implemented in the file radio_server.py(which is automatically started at boot time). This server simply opens a socket and waits for data. After any data is received, a couple of if-else statements different radio functions are called base on the incoming data.
The available commands are:

The server reply with the current frequency for each command.

The file radio_client.py simply opens an UDP socket, puts an '_' character between arguments and send the obtained string to the server socket.

The radioFM XBMC plugin.
In order to simplify user interaction I have created a new XBMC plugin(radioFM). Its purpose is to allow interacting with the Radio Server(and with the Radio Module) using the touch screen. In order to be able to use this plugin you need to have the radio_server.py started and the FM module plugged in. 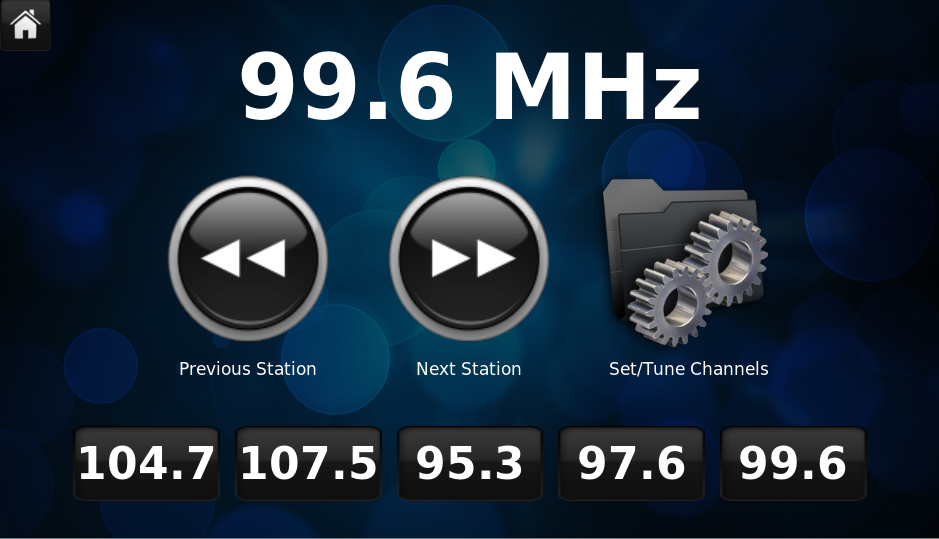 Features:
Connecting two audio sources(RPI and Radio) to one amplifier.
In order to correctly hook up two audio sources together(putting them in parallel) for a single output you have to use one schematic from this document. I have used the last schematic. Don't forget to use at least 1% tolerance for the resistors.

The new GPIO controller.
The GPIO controller is now using the official XBMC client code from xbmcclient.h.
Now, you can call a lot more XBMC functions for any button pressed or encoder movement.

TODO List:
- update to the latest Raspberry PI firmware(today it is possible but then Navit won't be visible)
- remove the calibration file for XBMC(/usr/share/eGalax/touchscreen_axes_calib) and use the values from the Debian calibration file(/usr/share/X11/xorg.conf.d/01-input.conf)
- create an XBMC addon to allow calibrating the touch screen for both XBMC and X11 windows and also for calibrating the external encoders and button
- create a configuration page(XBMC addon) for the carpc-controller settings
- create a better audio mixer unit
- create a new page for launching different X11 applications
Posted by Andrei at 3:56 PM